Defence and Naval Attache of the U.S. Embassy to Greece 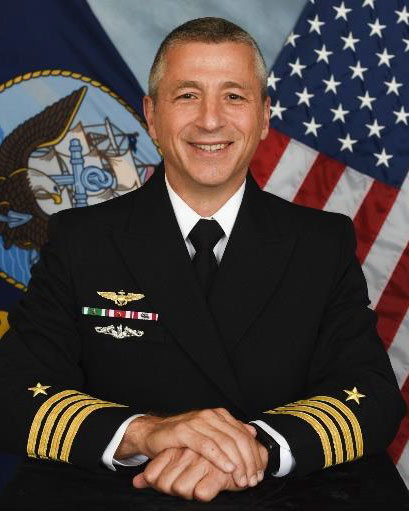 Captain Biery is a native of Staunton, Virginia and enlisted in the Navy in August of 1983 as a Fire Control Technician. CAPT Biery, assumed the duties of United States Senior Defense Official and Defense Attaché to the Kingdom of Denmark in June 2018.

Following initial training, CAPT Biery completed assignments aboard the fast attack submarine USS Atlanta (SSN-712) based in Norfolk, Virginia, USS Orion (AS-18) home-ported in La Maddalena, Italy and as an instructor and Leading Chief Petty Officer of the Combat Systems Division at the Navy’s submarine school in Groton, Connecticut. He was selected for the Enlisted Commissioning Program in 1993 and went on to earn a commission and Bachelor of Science Degree in Management Information Systems at Old Dominion University in December 1994.

Following flight training as an E-2C Hawkeye pilot in 1998, CAPT Biery joined the Liberty Bells of VAW-115 and Carrier Air Wing 5 forward deployed to Atsugi, Japan aboard the USS Independence and USS Kitty Hawk. During this time, he served as Assistant Operations Officer and accumulated almost 1,000 hours in the E-2C and over 230 Carrier Arrested Landings. From 2004 to 2008, CAPT Biery served as the Executive Officer of Naval Support Activity, La Maddalena, Italy and was responsible for the highly successful planning and execution of the closure of the U.S. Navy base.

In 2012-2016, CAPT Biery served as the Naval Attaché to Baku, Azerbaijan. Upon completion of the DAS assignment, CAPT Biery reported to the Office of Defense Cooperation (ODC) Athens, Greece as the Navy Programs Chief where he negotiated a $500 million Foreign Military Sales P- 3 upgrade project with the Hellenic Navy and obtained over $14 million in counter-terrorism training and equipment for the Hellenic Coast Guard to help with the excessive migrant flow into Greece.

In 2017-2018, he served as the Foreign Affairs Officer program manager and Chief of Naval Operations International Engagement Branch Head, OPNAV N3/5 implementing Council of Captains, Mentorship program, and other initiatives for the USN FAO community.

From 2018 – 2021, CAPT Biery served as the Senior Defense Official/Defense Attache and Naval Attache to Copenhagen, Kingdom of Denmark. Developed and nurtured close professional relationships with civilian and military leaders to respond to emerging great power challenges that directly impacted U.S. strategic interests by leveraging new opportunities and addressing new challenges in Greenland and the Faroe Islands in support of the National Defense Strategy while increasing access and presence of U.S. forces throughout the Kingdom of Denmark.

Fluent in Italian, limited Russian and Danish. CAPT Biery is married to Dominika Bednarek-Biery and welcomed a son, Nathen, born July 2021. He has two adult children Randall (26) and Justen (28) from a previous marriage.